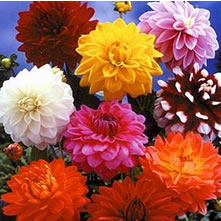 Dahlias are native to Central America, Colombia and Mexico and are commonly grown as garden plants. The Aztecs grew the dahlia for food, ceremonial purposes and for decoration.

In the 18th century the Dahlia was named after botanist Anders Dahl. In 1791 a few dahlia seeds were sent to England where they briefly flowered until eventually were lost. About the same time a box of dahlia roots were sent to the Netherlands from Mexico. Unfortunately only one bright red variety survived. This plant was used to cross breed with relatives of dahlias that were discovered earlier. The resulting plants are the ancestors of all modern day dahlias – and there are now 100’s of varieties!

Dahlias are famous for their bright, cheerful flowers with waxy petals. In Japan the Dahlia is called Tenjikubotan which translates to ‘Peony of India’.

Dahlias are available in the wholesale flower markets as cut flowers and are sold in wraps of 10 or 20 stems. They, unfortunately do not have a long vase life and tend not to travel that well. Saying that, dahlias emerged as a popular wedding flower in 2010 for the first time.

It has to be understood that dahlias are grown for their flower heads - the leaves will always look scruffy and discoloured - this is perfectly normal.

You can buy wholesale dahlias on our Web-Shop by clicking here.

To get the best from your wholesale cut dahlias please read the care instructions below carefully:

Never leave cut flowers in direct sun light, near a radiator, in a draft or near fruit. (The gas used to ripen fruit will harm most flowers). Keep the dahlias in a cool place and always keep out of the way of children.

You can buy wholesale dahlias on our Web-Shop. 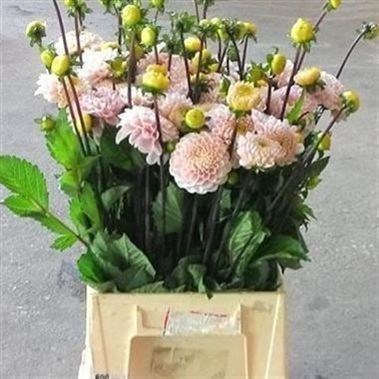 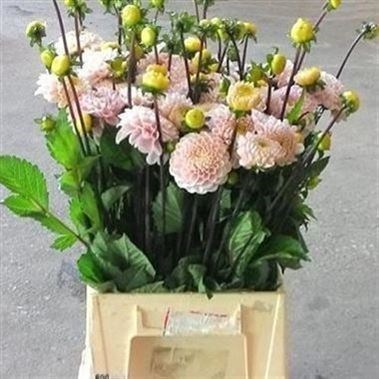